When "Two Inches" is a Dreadful Disappointment 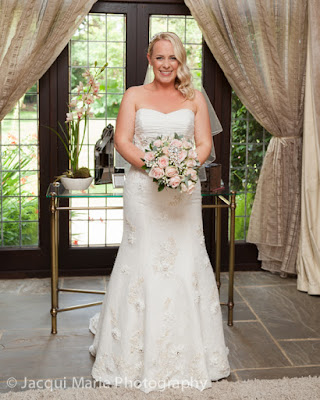 Moments after this photograph was taken something would happen that none of us could have predicted and gorgeous Victoria would be faced with a dreadful dilemma. 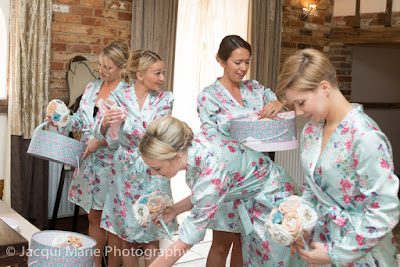 Bridal Prep had gone brilliantly well. Victoria and her five bridesmaids had the most wonderful time as they were getting ready at the amazing Rivervale Barn.

Everything had been organised to the last detail, everyone was happy and relaxed, the sun was shining outside and there was a real sense of occasion.

All the girls looked stunning and were ready in plenty of time. We finished all the photographs with a few minutes to go before the Registrars arrived to give Victoria her pre-ceremony meeting.

With the photographs done, the girls started to tidy up and do their final bits and pieces.

Victoria went to walk towards the full length mirror for one final look. As she did so, we heard her cry out, "JACQUI! I can't walk! The dress is too long!"

We were amazed! The dress looked to be the perfect length in the photographs. Jacqui put her camera down and put her dress-making hat on. Something she's had to do at a few weddings.

She discovered that it was the underskirt that was too long. Way too long. Two inches too long.

Victoria was in serious danger of tripping over her own wedding dress.

Jacqui undid the back of the dress to hitch up the underskirt but it was sewn in. There was nothing that could be done.

As photographers we were now faced with a challenging situation. At best our bride would be distracted all day about the prospect of tripping over her dress and that distraction would be seen in her expressions. Most likely she would be hitching the front of her dress up in many of the photographs. At worst, she might even fall over. Something had to be done.

Victoria looked at Jacqui. "What do I do?"
Jacqui drew breath. "Well, you either learn to kick it out the way as you walk... or I cut it off."

Victoria looked at herself in the mirror, looked at her girls, bit her lip, thought for a moment and said, "Cut it off!"
"Are you sure?" asked Jacqui.
"Yes, cut it off!"

Jacqui keeps many things in her camera bag that are nothing to do with cameras but are for emergencies just like this one. Including a full sewing kit and scissors. 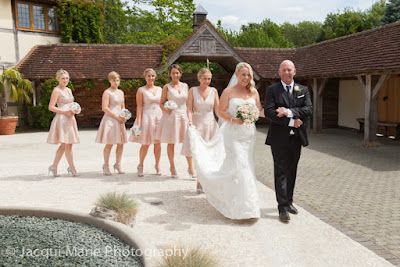 As you can see from this photograph, Victoria's train had a huge circumference and Jacqui had to cut two inches off the underskirt all the way round - with NAIL SCISSORS.

As the Registrars came in for their meeting with Victoria, Jacqui was under her skirt cutting yards off her wedding dress. With nail scissors it took ages but Jacqui had finished just as the meeting had finished and it had the desired effect. Victoria could walk confidently and safely.

What had happened is that the wedding dress had been shortened by two inches by a seamstress during the week but she'd forgotten to shorten the underskirt by the same amount.

Apart from Jacqui having achy fingers for a while...the rest of the day went according to plan and was back on the rails. 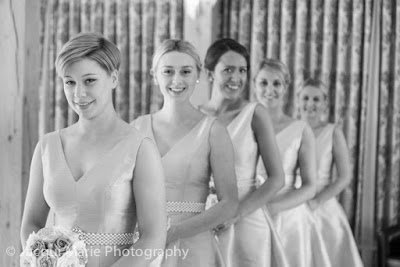 The girls lined up ready to lead their bride up the aisle. 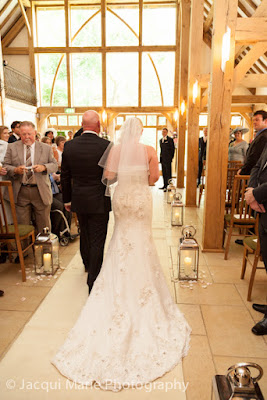 Victoria made it up the aisle to her man without falling over. 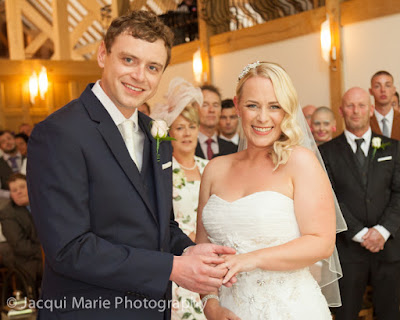 Victoria and Richard had a fabulous wedding and neither Richard nor any of their guests knew anything of the drama that had happened only moments before.

Please read the following blog post if you'd like to know more about Victoria and Richard's amazing day at the fabulous Rivervale Barn: Wedding Day Perfection at Rivervale Barn