Maximising Your Chances of Getting Sunset Wedding Photographs 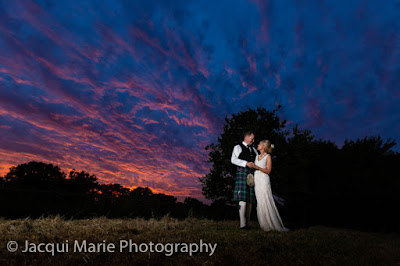 Sunsets are very special and so are wedding photographs of a bride and groom at sunset, sadly they are surprisingly difficult to achieve. So many things have to be right to be able to get one and it is not helped by the fact that they are difficult to predict and they can sometimes only last moments. But the more you understand about sunsets and evening skies, the more you may be able to plan to maximise evening sky photo-opportunities at your wedding.

The above photograph was taken after we'd said goodbye to everyone and were packing our cameras away in the car park when we saw this amazing sky. The bride and groom were having a great time dancing with their guests.

We popped back in with apologies and mentioned that, if they were interested, there was a lovely sunset. Their guests encouraged them to go out and get the photographs. We unpacked the cameras and five minutes later we had taken this photograph. Ten minutes later and the sky had gone a dull blue with no evidence that there'd ever been a sunset.

There are lots of different sorts of sunsets. The one above is where the sun has gone down but is still reflecting its colour onto the evening clouds. It makes for a rich red colour reflected in the clouds but only lasts moments. 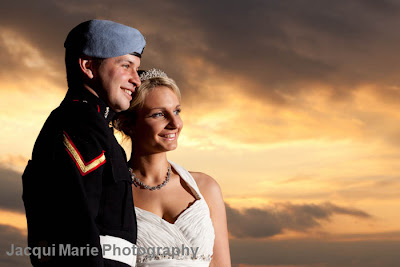 With this sunset the sun was still in the sky, bursting its golden light through newly formed holes in the clouds. The sun is higher in this sky and the colour is more golden and less red and the effect lasts longer. 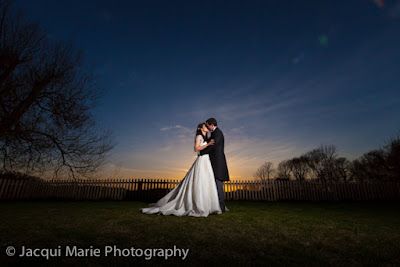 This sunset had virtually no clouds at all but the sun settled in exactly the right place allowing us to place the bride and groom in front of the last orange-red light of the day. The great thing about this venue is the totally open line of sight to the horizon where there sun actually sets. 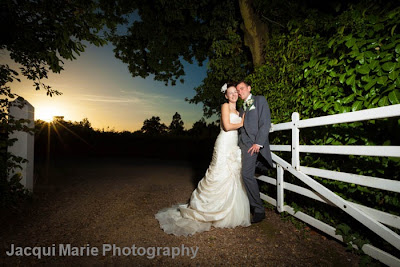 At this venue, there was no such open line of sight to where the sun would set but there was a small aperture between the distant hedges and the hanging leaves of the near tree. Obviously this means that we had to photograph earlier than sunset so the light was more golden and less red. 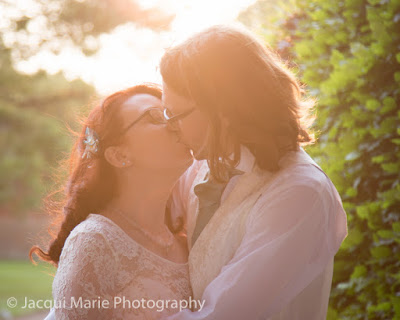 At this city venue there was no open access to the Western horizon. An hour or so before the sun sets, there is a lovely golden colour to the sunlight which can be great to use as a back light for some romantic photographs. 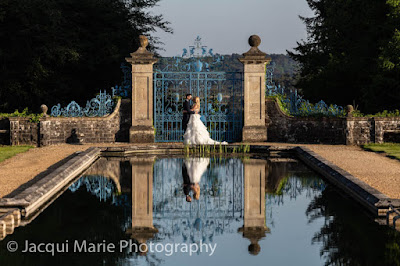 Using the same golden light as a main light can give some lovely photographs too. At this time of the evening the sunlight is such a romantic colour. 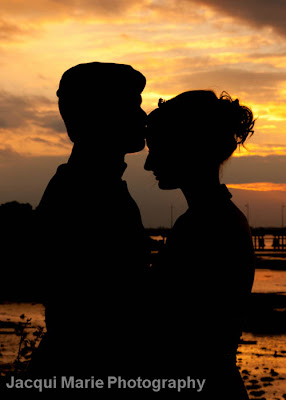 If you have something reflective in the direction of the setting sun (like the sea, a lake or even wet mud like in this photograph), then it can hugely enhance the effect of sunset in the picture. 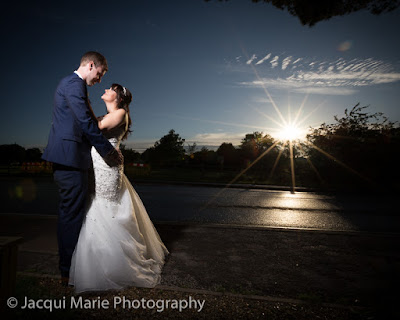 In this photograph the reflective surface is simply the hot smooth surface of a tarmac road. To the human eye the road looks like a distraction but through the lens it greatly enhances the effect of the setting sun. 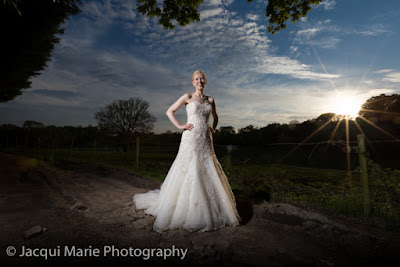 As the sun lowers towards its horizon it side-lights the clouds and often makes for a very interesting evening skies even before it goes golden (if it's going to). 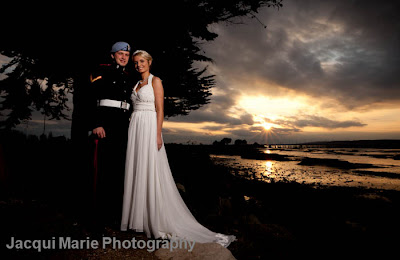 Sometimes, when it has been overcast all afternoon, as the sun lowers it can cause a break in the cloud layers that can result some stunning evening sky effects. If it is going to break like this, there are signs that it might do so half an hour or so beforehand. Enough time to get the lights rigged and to get some great photographs if your schedule allows. 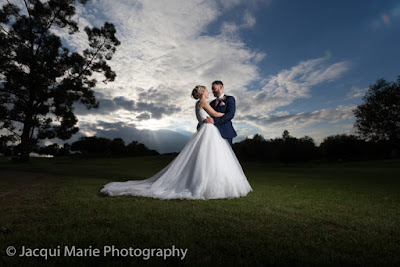 Even if the sun does not break through, quite often the cloud will thin and the resulting back-lit clouds can make for some really worthwhile romantic portraits. 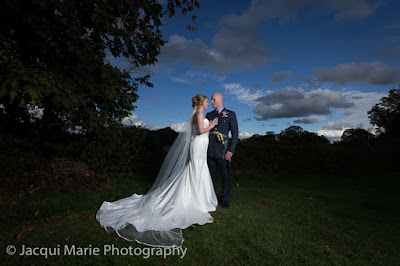 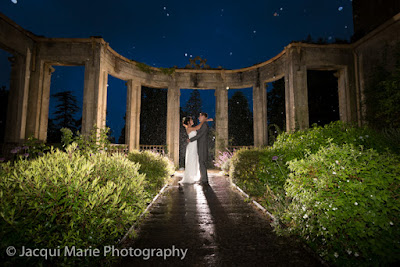 Even when all the above options are not available there are sometimes some great opportunities for an evening sky despite how unlikely they may look to the human eye.

This photograph was taken in the hour after sundown. It was raining, overcast and was getting dark very quickly.

Fortunately the stone work was floodlit by yellow lights. When auto-white balance on a camera tries to neutralise yellow, it adds blue thus making the grey sky an appealing blue colour.

Back-lighting the bride and groom gave the couple a nice rim light round them and threw some nice shadows on the pavement which look great when added to the reflections from our main light. The back-lit rain gave us a star field.

This whole photograph session only took two or three minutes and we were all back in the dry. 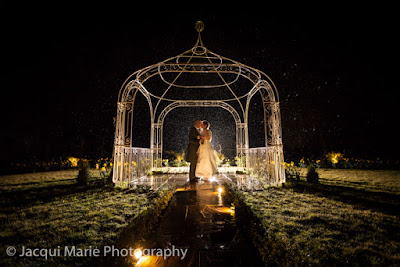 This photograph was taken several hours after sundown and there was no light in the sky at all. A back-light on the rain provided a star field behind the bride and groom and lit the white gazebo as well as throwing dramatic shadows across the lawn. The path lights gave some nice reflections in the wet stone.

Here's a summary of the some of the take-aways regarding sunset photographs:

There is a lot luck required in getting great sunset photography on your wedding day but you can maximise your chances by planning and being ready for it if it happens. Even if the sky does not light up with golden, orange or red clouds, an evening sky can be gorgeous in so many ways so it's well worth scheduling in 10-20 minutes for it in the evening if it's something you'd like.