The Secret to a Long Marriage? Keep a Score! 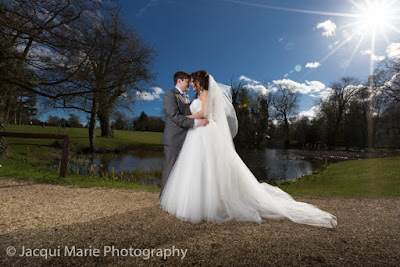 Matt and Charley held their wedding reception at the Meon Valley Marriott Hotel in the Spring of 2016. The hotel is attached to a golf course and the location for the romantic portrait session is a golf buggy ride away.

When it comes to photographing a wedding we rather hope that we look like the proverbial elegant swan seemingly gliding across the water with no effort at all - but if you were to peek beneath the waterline it is anything but effortless.

When we take a photograph in the thick of a wedding it may look as though we just pick up our camera and go click. There is of course so much more to it than that and we have many conventions that we've derived over the years to help us take our photographs well even when we're tired and when there are high levels of distractions.

During a wedding we try and help each other if we see that the other is about to break one of these conventions. We have been married for over thirty years now and we have always been competitive. So it was only a matter of time before we started keeping a score.

When we had met Matt and Charley before their wedding we had joked about how we keep a "Promise me you'll buck up!" score.

On this particular wedding Steve was using a new camera. Knowing that we had a golf buggy ride in order to get to the Romantic Portrait session, we were both at our camera bags stuffing our pockets full of everything we needed and rigging our cameras for the portrait session.

Steve tried to fit his trigger to the hot shoe of his new camera and it didn't seem to go on easily. He asked if Jacqui could bring her trigger in case something went wrong during the portrait session.

Having arrived at the location the other side of the golf course, Steve posed Matt and Charley and tried to fit his trigger to his new camera. It wasn't going on easily and he feared breaking it so he asked Jacqui for her trigger.

He repeated his request.

And quick as you like, reading the expression written all across Steve's face, Matt pointed at Jacqui and yelled "ONE NIL!"

We all laughed, Steve pushed home the trigger on to his new camera and all was well. We had a great romantic portrait session with them and got some lovely photographs...all the time with banter flying around like:
"I gave you one job..."
"It worked didn't it..."
"That's not the point..."
"It's fine, we could have optically triggered it..."
"But you had one job..."

There was a great deal of sniggering and laughter and it was all caught on camera. Mission accomplished.

An hour later, Matt and Charley had just sat down for their meal and as we were chatting to them, Jacqui announced that the score was now FOUR-ONE to her. Steve had had a bad hour. 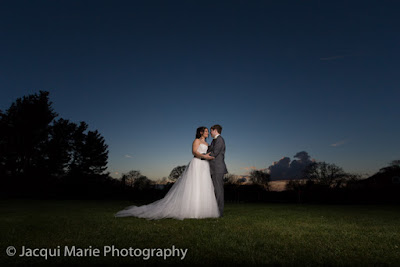 At the end of their day, Steve took them out to take this photograph. He was still 4-1 down but he did take a nice photograph...with his own trigger.

All joking apart, some brides and grooms get a little self-conscious during the romantic portrait session and if they do, having banter between the two of us or even between the four of us takes their attention away from being self-conscious and it's then easier for us to take natural photographs of them...and it's a lot of fun too.

Having all those conventions helps us do a complicated job even in difficult situations...keeping a score helps the brides and grooms from getting self-conscious.

So does "keeping a score" help towards having a long marriage. We've been married thirty three years and we do keep a score and it does make us giggle, so maybe it does.

What's for sure is that it's helpful when it comes to distracting brides and grooms from becoming self-conscious during their photographs.

PS Steve wrote this blog and Jacqui reviewed it.  She found a mistake and predictably yelled "ONE NIL".